Elaine Viel and Peter Viel - Art is not always on paper 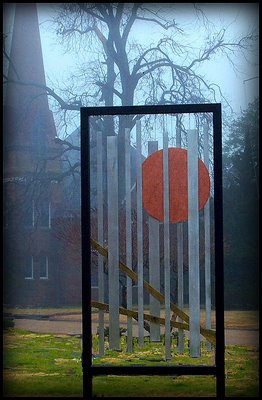 There are many kinds of artistic images not just paintings. Christo and Jeanne-Claude and others like this award winning piece by a Virginia artist are always intriguing to me. I have an imagination that keeps me thinking and relating images to events and images in my personal history.

This one I titled "Tears of the Sun" not after the Bruce Willis movie it was just the image the art drew out of me. Could be I'd heard the movie title and it was tucked back in my mind. At any rate I hope you get the idea. Art is maybe best characterized by the Masks of Comedy and Tragedy of the theater. Another art is music. Today various arts intermix and meet in many ways. Rock Opera started

From Wikipedia ~ "The earliest example of a theatrical production that incorporated rock and pop music was Hair, a hippie-themed musical subtitled "The American Love/Rock Musical" that made its debut in late 1967. Much like Jesus Christ Superstar, the first notable rock musical after Hair, it was very controversial in its day. Jesus Christ Superstar, composed by Andrew Lloyd Webber and Tim Rice was first recorded as a concept album in 1970 and the money made from album sales was used to fund the subsequent stage production in late 1971. The musical Godspell which was written after Jesus Christ Superstar but was actually staged before it, had similar religious themes (albeit much less controversial) and pop/rock influences. "

"The Who returned with Tommy, the first album explicitly billed as a rock opera. Tommy remains one of the most famous rock operas, with concert, film and theatrical productions mounted over the course of three decades. The Who would later release another rock opera, Quadrophenia, also made into a film.

Townshend may also be the originator of the term itself. In 1966, he played a comedy tape to his friends called "Gratis Amatis". One of his friends made the comment that the odd song was "rock opera." Kit Lambert, the Who's producer, is than believed to have said "Now there's an idea!" However, the July 4, 1966 edition of "RPM Magazine (published in Toronto) notes that "Bruce Cockburn and Mr [William] Hawkins are working on a Rock Opera, operating on the premise that to write you need only 'something to say'."

Ten years later, Pink Floyd enjoyed similar success with their rock opera The Wall, written primarily by Roger Waters, which became the third best-selling album of all time. As with Tommy, The Wall has been staged both by Pink Floyd (1980-81) and Waters (1990) as an incredibly elaborate concert, with Waters' version taking place at the Berlin Wall. The plot was also used in an eponymous feature film, and Waters is currently adapting the story for a Broadway-style production."

Point is art is many disciplines rolled into an umbrella. Art, it may be said, is the enlightenment of the mind where muses create , dance, sing and make clear images and we may all be amused in the more complex sense of the word. Everything good is found in truth and reality and it is always a mixture of comedy and tragedy and never the absence of either.

Paul,
Thanks for including my sculpture Recondite XI in your wonderful Blog.
Recondite XI is the final piece in my Recondite Series which included 9 paintings, a ceramic work and this sculpture. I was influenced by landscapes of the Ukiyo-e woodblock prints of Japan.
Recondite comes from the Latin word Recondere meaning “to hide”. The sculpture is both an abstracted landscape and a viewing “box” of the landscape behind it, much of which is hidden from view. I wanted to create a serene image and one that is both visible and hidden. Recondere
Elaine