Something I always wanted to do is become a like of sorts to walk a path with many forks to see where it leads. I am going to do that with this blog and get suggestions from each artist (living that is) on another artist who inspires them. This suggestion came from Noelle Dass a wonderfully talented artist featured a couple of previous posts ago. Go back and (re)visit that post and visit her web site for more information.

A student at the Ecole des Beaux-Arts in Paris, he won the Prix de Rome in 1850 and his realistic genre paintings and mythological themes were exhibited at the annual exhibitions of the Paris Salon for his entire working life. Although he fell into disregard in the early 20th century, due perhaps to his staunch opposition to the Impressionists, there is a new appreciation for his work. In his lifetime, Bouguereau painted eight hundred and twenty-six paintings.~ Wikipedia 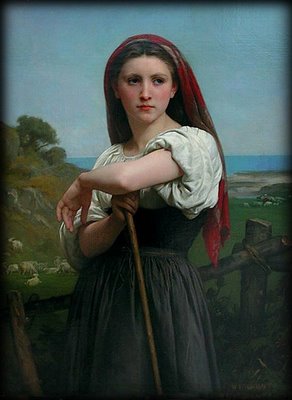 I found his art a few years ago was immediately drawn to search the web for more. Bouguereau's paintings does something to me that was hard to describe at the time. After some introspection and intraspection and just plain inspection I think it's becoming better defined. I'll try but I'm not sure my explanation will be complete.

I just reviewed some images and chose the one above because it's one I've not seen before. This image is a pretty good example of what I like about Bouguereau. Clarity of the image and the detail stands out much like a Rockwell and that's the first impression. Then I see color very subtle and not at all garish but it is very distinct and shaded perfectly and the hues always seem to be perfect compliments. Dimension(s), Depth and Detail gives the image a life as if I were meeting Jeune Jeune Bergère on a road along the French Coast. There is another aspect of Bouguereau I can relate to because I'm a dreamer. As realistic and alive the image is and even in this pastoral setting it is above all a dreamers view of beauty. 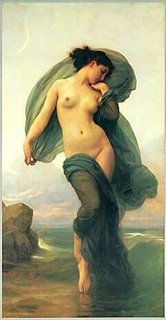 There is something about reality invading dreams and expressed so beautifully that makes this artist very special. Today he is being rediscovered thanks to the internet. Lovely works that are part fantasy and part human aspiration never are out of style.