Analee Fuentes Ghosts of the Past and Future 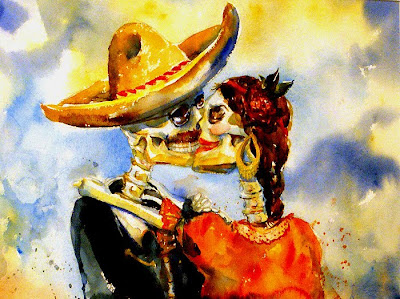 I met Analee Fuentes at the Maude Kerns Art Center’s Dia De Los Muertos show this year, first through her works and then in person.

Analee was born in San Diego, California and raised in an area I am well familiar with, Barrio Logan. I worked for awhile at Continental Maritime of San Diego and drove through Barrio Logan often and loved the murals and art I saw in that area. It is no wonder Analee came to love art and the culture she was a part of growing up.

It always amazes me when I look back on my life and see the influences on my life and how little I realized the effect my environment had on who I am today. Analee Fuentes now beautifully portrays culture, mysticism, color of the past in beautiful works, like the one above, with the world today and the tenderness that surpasses the grave. Her presentations of this and other works for the Dia De Los Muertos bring mortality into the land of the living in a hauntingly sensual and sensitive look at death and life.

I went to Analee’s website (http://analeefuentes.com/) to understand more fully the depth of her work and found a treasure of visual images that is impressive. Graphic images of color and diversity with smoothly rippled water and crossed fingers of the lottery along with earthy and earthly portraits that focus razor fine on small aspects of a larger view.

Meeting Analee was a little like meeting a calmer side of life spiced with a peppers of enthusiasm of her work. The thing I liked most about this artist is her willingness to open to her environment. Reading her biography page I was impressed by this particular paragraph:

"The Northwest has a distinct cultural history laced with stories of immigration and racial movements; most emphasize the Eastward route led by the Lewis and Clark Expedition. My awareness of the influx to our region is different, focusing more on the Northwest movement, the ongoing movement from Atzlan, the current “Oregon Trail.” It is more like the swirling of a living river than a wagon train. I necessarily view my surroundings from my perspective, in the here and now. Here is where Sasquach meets El Chupacabra, where Chalupas are not little boats, but something one eats at Taco Time." ~ Analee Fuentes

There are many trails like the Oregon Trail and I am glad her’s crossed mine at this show and I was treated to her wonderful sense of culture and the timelessness of her creations. I’ll look for future works and showings of this fine artist in the future.
Día de los Muertos Arist Talk
by Analee Fuentes
Wednesday, October 27, 2010, 7-8:30pm
The Maude Kerns Art Center invites the public to a special Día de los Muertosartist talk by Analee Fuentes on Wednesday, October 27, from 7:00 – 8:30 pm at the Center. Fuentes, a Mexican American artist living in Coburg, has four pieces in the current exhibit, including a striking image of two skeletal lovers kissing and a humorous rendition in watercolor of the famous Grant Wood painting, American Gothic. She will speak about her work within the context of the popular Día de los Muertos holiday.
Posted by Paul at 12:50 PM 2 comments: