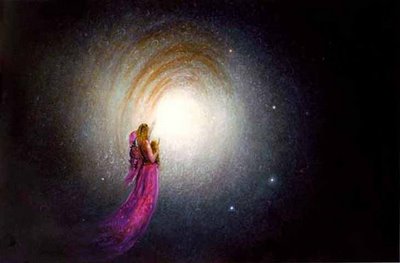 Freydon Rassouli has been one of my favorite artists for a long time. Mystical art at it's best by a true visionary.

He was raised in a historical home decorated with murals and intricate floral designs. Inspired and encouraged by his mystic uncle, Rassouli developed an early appreciation for painting and mystical poetry, and spent endless hours taking lessons from classical and impressionist artists, and studying mysticism. Soon he discovered new ways to transform his subconscious images into forms that he could share with others. Recognized as the Best Student Artist in Iran at 15, Rassouli was awarded a government grant to study painting in Europe. He migrated to the United States in 1963, where he studied painting and architecture at the University of New Mexico, and was honored with the Leadership Award from the Institute of International Education though he began his professional career as an architect, creating three-dimensional structures to satisfy his artistic drive, Rassouli's passion for painting persevered. Through time, he has created hundreds of artworks that have received global recognition for his unique Fusionart style

This piece of work is called "Celestial Song"