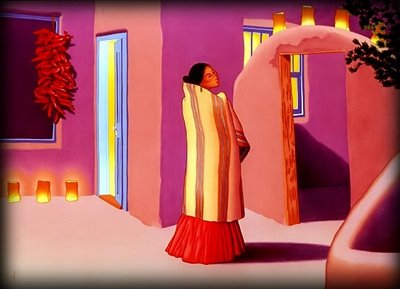 My interest in Southwestern Art began in Albuquerque, New Mexico with it's Native American flavor and the rich colors of R.C. Gorman. Gentle lines, simple forms and color beautifully chosen. I've bought a few lithographs and two were by Gorman.

One was a beautifully drawn woman in repose that is very typical of Gorman with rounded lines and peacefully set. The other was atypical of his work at the time called Canyon De Chelly at Night. The canyon is awesomally large behind thesmall figure of a woman. The deep blue and gradient sky is filled with stars that brighten as light is raised slowly on the image.

"Often referred to as the Native American Picasso, by the New York Times, Gorman was known and beloved worldwide for his paintings and sculptures of his favorite subject, outsized women. I revere women. They are my greatest inspiration, he told The Associated Press in a 1998 interview at his studio in Taos.

Gorman was born, in 1931 on the Navajo Reservation in Chinle, Arizona. His father, Carl Nelson Gorman, was a sculptor and painter. In the late 1950's Gorman went to Mexico where he acquired the influence from Diego Rivera, David Siqueiros and Rufino Tamayo among others.

Over his lifetime, Gorman had more than 20 one man shows; his work was part of the exhibition. Masterworks from the Museum of the American Indian at New York's Metropolitan Museum of Art, where he was the only living artist represented. Pop-culture icon Andy Warhol painted a portrait of Gorman in 1979."

Next Artist(s) who was mentioned in thisblog is mentioned here is Diego Rivera and his wife Frida Kahlo.
Posted by Paul at 10:52 PM

RC Gorman is my granma's uncle. I have seen his drawings, and all I can do is think how much I draw like him. It's wierd, because I have been drawing since I was able to walk, and my art is excactly like his style. I wish I could have met him. If you want, I can draw a piece of art and show it to you.