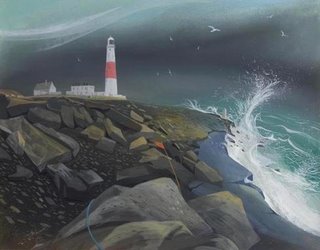 "Nicholas Hely Hutchinson (1955- ) is a painter, influenced initially by Dufy and Matisse, and also drawing on the English NeoRomantic tradition. He settled near Blandford, Dorset, and the countryside of that county and Wiltshire, horse racing, interiors and still life were among his subjects. He studied at St Martin's School of Art and Bristol Polytechnic. Nicholas showed solo with the Montpelier Studio from 1984, later exhibitions including Wattis Fine Art, Hong Kong,from 1992, the Jerram Gallery, Salisbury, 1995, and the Portal Gallery in London. He is represented in the Government Art Collection, Barbican Centre and Unilever, as well as a number of private collections. Hely Hutchinson is the third son of the 8th Earl of Donoughmore, an old Irish family." ~ Storm Fine Arts Gallery

I found Nicholas Hely Hutchinson nestled snugly in the pages of "Ireland of the Welcomes" a Dublin based magazine. It was at an imaging (X-ray, CAT Scan) lab in Eugene, Oregon. I was impressed with his style and use of muted color. Some images were "fisheye" distorted and others stark, straight-lined and crisp "Shaker" simple. Nicholas struck me as very simply efficient but with a breathtaking flair for flight. This image is a great example of soft rocks and sharp water that appears to me to be blue and white fire. I love his work and it's art for my soul
Posted by Paul at 11:16 PM